Narakeet is a text to voice video maker, but it also allows you to make a video with pictures and your voice. This tutorial will help you improve the video voice over by applying some common tricks:

Text to speech voice over

For videos created from a presentation, add the narration text into presenter notes of your presentation. After you upload the presentation to Narakeet, you’ll be able to choose one of the many voices or languages, and Narakeet will automatically add voice over your slideshow.

For videos created from a script, add the text directly into a markdown document. Check out the Narration format reference for some good examples.

Add a larger break by splitting the text into several paragraphs. Just leave a blank line between two sentences, and you will get a slightly longer pause.

To add a pause, use the pause stage direction, followed by a colon (:), and the number of seconds to pause after the colon. For example, the narration block below has two paragraphs separated by a three-second pause.

You can use pauses before or after all the other text in a slide, for example to delay the voice-over start in the first slide, or to keep the last slide in the video for a bit longer after the narration, to make the ending less abrupt. Here are some examples:

Change the voice for a paragraph

You can also use multiple voices or languages in the same video scene. To do so, add a voice stage direction between the paragraphs. The instruction should be in brackets, starting by the keyword voice, followed by a colon (:) and the name of the voice you want to use. It’s important to add this into a separate paragraph, so there needs to be a blank line between the instruction and the rest of the text. For example:

You can use multiple languages easily in the same scene by switching the active voice to one that speaks a different language.

Check out the list of available voice names for the options you can use in this way.

Provide hints for the voice using emphasis marks. Enclosing a bit of text with single underscore (_) or asterisk (*) adds a moderate emphasis, enclosing with two underscores (__) or two asterisks (**) creates a strong emphasis, and enclosing into two tildas (~~) creates a reduced voice.

For best results, enclose entire sentences into emphasis blocks. Using emphasis on parts of sentences might create weird pauses in the narration.

You can control emphasis or volume for entire paragraphs using stage directions such as voice-emphasis and voice-volume. For example, the following scene makes the second paragraph louder than the first one:

The following example adds a moderate emphasis to the whole paragraph:

Spell out a word, acronym or symbol

Enclose a phrase between two back-ticks (`), and Narakeet will spell it out. You can use this trick to read out an acronym or instruct students how to write a complex word:

Different voices will read words differently, so if a word is not pronounced correctly, try a different voice in the same language.

To make Narakeet spell out individual letters in a word, write it in upper-case. Most voices will read treat all-upercase words as acronyms and spell them out.

For an even greater control over the pronunciation, you can use SSML tags. For an example, check out the Using SSML section in the Narration format reference.

Slow down or speed up the voice

When creating the video from a presentation, you can choose the narration speed using the ‘speed’ option in the ‘Edit settings’ dialog. 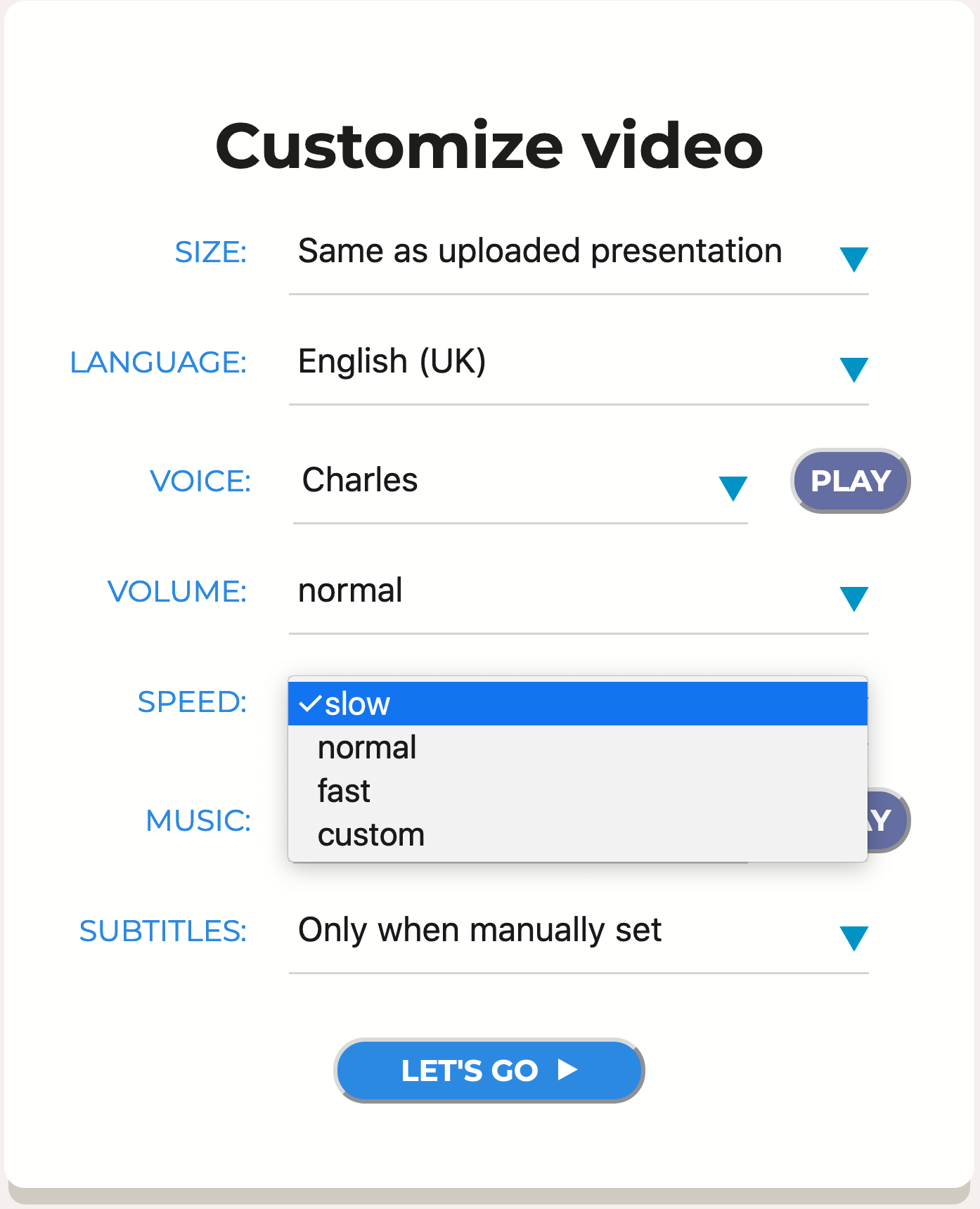 Choose a standard preset, such as fast or slow, or select the custom option for a wider range of settings. The custom slider lets you adjust the speed in smaller steps from very slow to very fast.

If you create videos from a script, you can also set the reading speed globally using the voice speed header:

Change the voice speed for a single slide or paragraph

You can also set the speed for a particular paragraph or scene using the voice speed stage direction. Here is an example:

Numerical values allow you to set the reading speed on a scale, as a multiplier of the standard speed. The value 1 corresponds to the usual reading speed for the voice, so 0.5 is half-speed and 1.25 is 25% faster than normal. Here is an example:

Use your own voice or pre-recorded audio

Automatically generated narration is great for quick experimentation, and for iterating on the content. But having the same voice as everyone else can mean that your videos lose the personal touch. For authors that want to use their own voice for narration, but still make videos easily, Narakeet lets you easily replace the generated narration with your own audio.

In a video created from a presentation, to use your own voice, remove the text from speaker notes, and add an audio file to a slide. If a PowerPoint slide has an audio file attached, Narakeet will play that as part of the narration for the corresponding scene. Narakeet supports WAV, MP3, WMA, AAC and M4A files.

If you use scripts to create your videos, use the audio stage direction to link to an audio file in your project.

Get help with something else

If this page did not help you, please send us an email to contact@narakeet.com.